Researching haunted houses recently I stumbled upon an intriguing headline in the Sept. 29, 1912 issue of The Salt Lake Tribune. The story included all the ingredients for a superstitious and spectral feast: an heiress heeding a witch’s warning, a young woman’s suicide, a parade of spirits, and the haunted roof that served as a conduit to the other side.

After more research, I found out that many of the background details printed in The Tribune were factual. As for the spirits that allegedly haunted the dwelling…well, you have to draw your own conclusions about that. 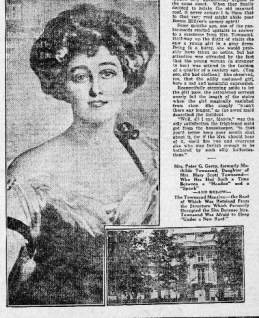 Mary Scott Townsend was the daughter of Pennsylvania railroad and coal tycoon William L. Scott, making her family “worth ever so many millions” as The Tribune pointed out. By 1899, Mary had wed Richard Townsend and wanted to start fresh in a new town. The couple left Erie, Pennsylvania for the nation’s capital where they purchased the Massachusetts Avenue property from Judge Curtis Hillyer. Not long after demolition of the Hillyer residence started, Mary remembered something from her childhood and insisted that they abandon their plans for construction of a new home.

A witch told Mary when she was a young girl that if she ever slept under a new roof that she would die within a year. (The Omaha Daily Bee reported that death would occur within six months. Either way, the warning was enough to spook her.)

After unsuccessfully trying to persuade his wife to disregard the oracle’s warning, Richard spent several months looking for an old home. Then he devised an idea that would appease Mary and allow them to build the Townsend Palace: simply incorporate the existing Hillyer roof into the new construction. Unfortunately the Townsends didn’t realize that there was tragic history already attached to that roof. Judge Hillyer’s daughter Bessie committed suicide in the home in 1888 after an unexpected elopement and short-lived marriage. (Don’t worry, I’ve saved articles about Bessie for a later post.) 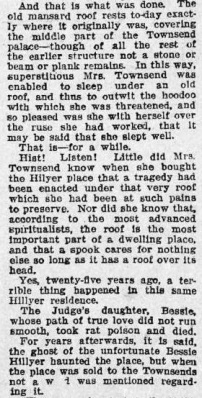 Richard and Mary’s mansion was completed by 1901, but Richard wouldn’t live there for very long. In November 1902 he fell from a horse and fractured his skull. Mary remained in their dream home with their daughter after his death.

The Tribune never named any eyewitnesses to Bessie’s ghost, so perhaps there weren’t any. You know how people love ghost stories. (You’re reading this for that very reason, I imagine.) 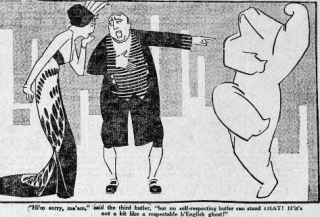 Sometime in 1912 employees reported paranormal activity around the mansion, accounts withheld from Mary out of the fear of dismissal or being deemed insane. A parlor maid saw a somber-looking young woman on the stairs dressed in old-fashioned gray clothing. The figure “magically vanished from view” after the maid nearly fell down the length of the staircase. Several days later a butler encountered four marching spirits, each one holding one something: a washboard, a telephone, a jug, and a drum. The butler approached Mary with his tale of the spookical parade, but Mary dismissed the notion that her home was haunted. After that, a number of the Townsend family’s domestic employees shared their supernatural scenarios with the matriarch, but she paid them no mind.

Her disbelief continued until she ran into the marching ghosts herself and immediately made inquiries into the property’s history. Mrs. Townsend learned of Bessie Hillyer’s suicide and came to the conclusion that the hauntings were connected to the old roof. 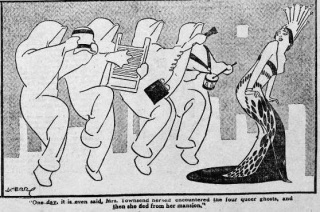 The Tribune described the Townsend Home as deserted in September 1912, but Mary lived there until her death in 1931. If she “abandoned” 2121 Massachusetts Avenue, she didn’t stay away for very long and her reasons for boarding up the windows and doors and boxing up the statues are entirely open to speculation. 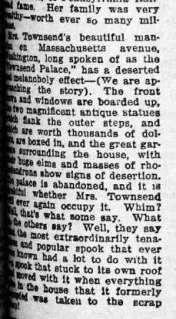 If you’re familiar with the D.C. area, you might recognize The Townsend Mansion as the Cosmos Club.

Published by The Dead Bell

View all posts by The Dead Bell