The scold’s bridle was a device used beginning sometime in the 1500s in Britain as a means to humiliate and punish a woman for bickering, nagging, speaking out against certain people, or for gossiping too much. Science Museum: Brought to Life has a photo of an actual scold’s bridle and more information.

Here are a few clippings from American papers in the late 19th and early 20th centuries which described use of the device in Europe.

“THE SCOLD’S BRIDLE.
In the Days of Queen Bess Women Who Gossiped Had to Wear This Awful Mask.

The women who lived in England in the time of Elizabeth did not dare let their tongues go apace. If they forgot and scolded and nagged they were likely to be punished by the ‘scold’s bridle,’ a particularly ingenious instrument of torture. It was an iron framework like a cage and some kinds had a framework in front covered with spikes, which was put over the victim’s tongue. If she tried in any way to move her tongue the unruly member suffered. This will give opportunity for some sarcastic man to say that all the good ideas do not belong to this century.”

“THEY BRIDLED THE SCOLD.
Awful Punishment to Which Women Were Subject at One Time.
New York Press.
An instrument of punishment formerly much used in England, but never in this country, was the ‘brank,’ or ‘scold’s bridle,’ or ‘gossip’s bridle,’ used on women. It consisted of a crown framework of iron, which was locked upon the head and was armed in front with a gag, a plate or sharp-cutting knife or point which was placed in the mouth so as to prevent the tongue being moved without it being cut in a horrible manner. With this cage upon her head and with the gag pressed and locked against her tongue, the miserable creature, whose sole offense perhaps was that she had raised her voice in defense of her social rights against a brutal or besotted husband, or who had spoken honest truth of some one high in office in the town, was paraded through the streets led by a chain held in the hands of the bellman, the beadle, or the constable, or else she was chained to the pillory, the whipping post or the market cross, and subjected to every conceivable insult without even the power left her of asking for mercy or of promising amendment for the future; and when the punishment was over she was turned out from the town hall maimed, disfigured, faint and degraded, to be the subject of comment and jeering among her neighbors, and to be reviled by her persecutors.”

This next lengthy article was found in the Evening Star [Washington, DC] on May 12, 1900. 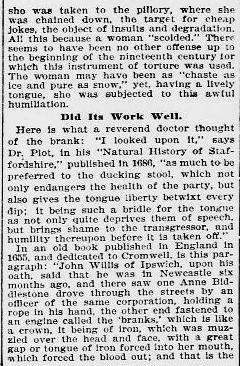 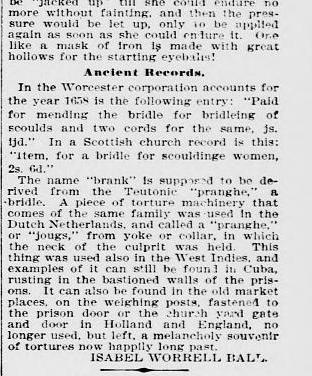 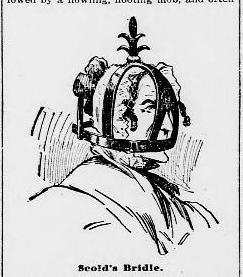 Published by The Dead Bell

View all posts by The Dead Bell